Indeed, these ‘non-phone’ mobile devices show impressive hockey stick growth, generating 20 percent of all ad impressions across the Millennial Media mobile advertising platform during the first quarter of 2012. That’s an increase of one-third (33 percent) over the previous quarter. A year ago the share of impressions from connected devices including tablets was 15 percent.

Connect the dots, and this newest edition of the monthly Mobile Mix report indicates that views of online advertisements are gradually migrating to mobile devices. It’s a shift marketers must factor into their mobile advertising strategies. (Click HERE to download the full report.) 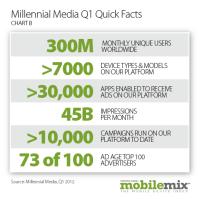 While smartphones are a big part of the picture (eclipsing feature phones), this report details the advance of tablets, a non-phone marketplace poised for massive global growth.

Take the new report from BI Intelligence. It predicts global tablet sales (this includes e-readers) will grow at better than 50 percent compound growth rate over the next few years to hit nearly 500 million units a year by 2015. 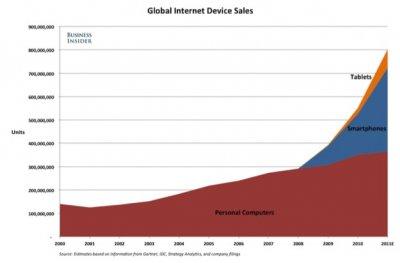 Do the math and tablet sales in 2015 will exceed the number of PCs currently sold (around 360 million), making tablets a bone fide $100+ billion market.

In other words, Apple’s iPad, Samsung’s Galaxy Tab, and Amazon’s Kindle Fire ranked in the top 20 among all mobile devices during the first quarter of 2012. That means 15 percent of the top mobile devices weren’t mobile phones; they were connected, non-phone devices including tablets.

Its growth that is largely tied to the increased adoption and usage of the 12+ new model tablets introduced in 2011. Brace for an explosion in tablet shipments as we make tablets part of our daily digital routine (multi-tasking via Orange Exposure, an annual independent study, or doing our banking while we lounge on the couch watching TV via Lightspeed Research). Another driver is sure to be the rise in the number of tablets soon to hit the market. (I’m thinking here of Windows 8 and Windows-based tablets, in particular.) 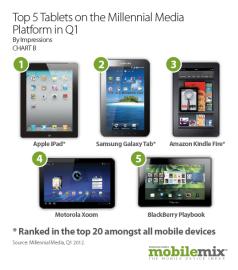 The report also found that Apple was the top single manufacturer in the mobile space and owned the top device, the iPhone. Samsung ranked second, and claimed four of the top 20 mobile devices (thanks to its Galaxy Tab, Galaxy S II, and Galaxy Note). Look at the bigger picture and Android beat out iOS in overall presence, capturing 49 percent of total impressions. (Android was also responsible for 14 out of the top 20 devices — which adds up to a whopping 70 percent share of the hardware ranked by impressions.

At MobileGroove several columnists have chosen to comment on the rise (and rise!) of mobile video. Regular contributor Jeff Hasen calls it the one to watch (pun intended), and A. Troy Brown, chief architect and president of one50one, notes that that African-Americans over-index versus other segments when it comes to accessing video-sharing websites via their smartphones. In his view: “As mobile devices become more sophisticated and feature rich, and 4G networks enable faster download speeds, video sharing and streaming usage rates is poised to skyrocket among diverse populations.”

The explosive growth of mobile video is also a focus of the new Mobile Mix report. It tells us mobile video views increased an incredible 958 percent (!) from Q2 2011 to Q1 2012.

This Mobile Mix zeroes in on two growth opportunities that are wonderfully intertwined with each other and the way we lead our digital lives. Tablets are BIG, generating 1-in-5 ad impressions across the Millennial Media mobile advertising platform during the first quarter of 2012. Significantly, mobile video is also huge, growing nearly 1000 percent from Q2 2011 to Q1 2012. But this is not a numbers game for analysts and observers to place their bets. This is a profound shift in our personal, mobile behavior. And it’s a development that marketers must grasp if they want to benefit from what is shaping up to be a new phase of mobile advertising growth and opportunity.  As Millennial put it (via this InformationWeek post): The increased consumer adoption of tablets is “changing how digital media is consumed.” All the more reason for brands to collect the intelligence that will tell them who their audience is and where marketers can find them.