People are increasingly relying on mobile for assistance to make a wide variety of product and purchase decisions, a seismic shift in behavior that spells opportunity for brands across all industry verticals, including automotive, retail, travel, finance, entertainment, pharmaceuticals and telecoms.

But there’s a catch. Marketers must develop solid advertising strategies that understand who their customers are, how they use their mobile devices and where campaigns can reach them at scale.

The is where a new series of mobile advertising reports, aptly titled the Mobile Intel Series, comes in, providing brands with strategic direction and a deep-dive into the numbers and trends that matter most. The series launched with a focus on retail (read my in-depth analysis here), and continues with a look at how automotive brands can best leverage mobile to maximize spend and results.

The resource draws from network data provided by independent mobile ad and data platform, Millennial Media (accumulated from data from campaigns executed in over 250 countries and territories in 2Q 2011), and consumer research conducted by mobile measurement firm comScore.

Getting mileage from mobile

Automotive brands were among the first to truly ‘get’ mobile, as evidenced by a string of ambitious and award-winning campaigns to increase brand awareness and encourage interaction with consumers pre-sale (test drives, dealer visits, app downloads) and post-purchase (inspection, maintenance, customer service). 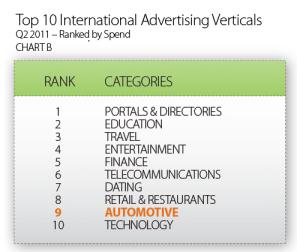 Predictably, ad spending by companies in this vertical has been significant, consistently placing automotive among the Top 10 Global Mobile Ad Verticals on Millennial Media’s mobile platform for the past year.

Against this backdrop, the report finding that automotive mobile ad spending increased a whopping 236 percent from Q2 2010 to Q2 2011 (increasing from an already high level) can be read as a confirmation that a vertical explosion in mobile advertising spending and awareness is well underway.

Additionally, comScore’s own review of mobile campaigns reveals that automotive display advertising increased 169 percent year-over-year, with 33, 277 automotive companies advertising on mobile in 2010, up from 19,724 the previous year.

Who is the automotive audience?

The report defines the audience of people accessing automotive content on mobile devices (phones, smartphones, tablets) as mobile auto consumers, and notes the key characteristics they share (compared to the total audience of mobile users). 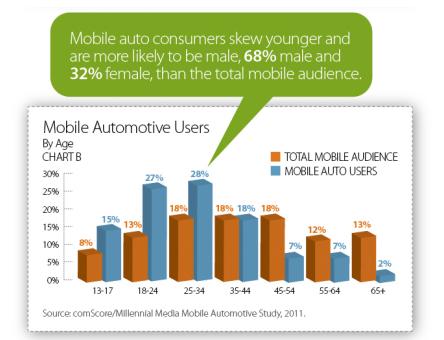 Mobile auto users also tend to be more affluent than the general mobile population. Specifically, these consumers overindex in both the $75,000+ and $100,000+ annual income brackets. Clearly, a significant sub-segment of the mobile auto user population can be defined as a discerning audience primed for interaction with luxury car brands via their mobile devices.

But the real news is the frequency with which mobile auto users access automotive content on their devices—regular interaction that reveals a significant audience of auto enthusiasts and passionatas.

The report breaks down precisely how users access the content (apps, browsers, text). Interestingly, mobile apps as an entry point to automotive content and advertising show significant growth (25 percent of total access, up from 20 percent in August 2010), a trend the report forecasts will pick up speed as smartphone penetration ramps up. Indeed, analysts are bullish, with Morgan Stanley reporting last month that smartphones have already surpassed feature phone shipments in the U.S. (as of Q1 2011) and Western Europe (as of Q2 2010).

The report also maps the ‘migration paths’ of mobile auto users as they make their way across the mobile Web. It reveals a wide variety of sites and destinations (news, weather, entertainment, and so on) where automotive advertising is likely to reach and influence potential car buyers and/or people in the market for maintenance (such as a reliable shop for an oil change or new winter tires). 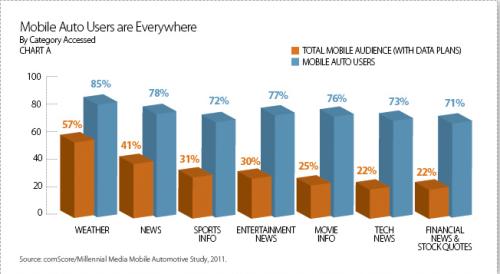 As the report observes: Family-centric sites are a logical fit for brands promoting SUVs, minivans and vehicles with plenty of room and features for family members.

The message to brands here: Think outside the box — and see mobile the way your customers do. Don’t just offer people fries with their fries (automotive advertising on typically automotive focused sites, for example). Women, traditionally the finance managers of the family, consume a wide variety of content, so don’t limit sites and destinations to the usual suspects.

Brands in the fast lane

How are automotive brands harnessing mobile and what campaigns goals and tactics top the agenda? 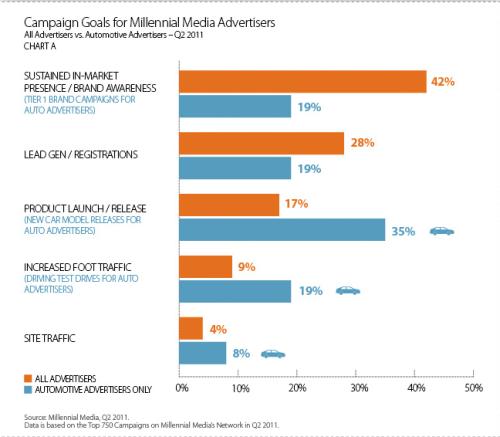 Significantly, brand awareness is a prime focus in the automotive sector — and one that makes business sense in my book since a car purchase is not a daily, monthly or even annual occurrence. Indeed, in a sector where the end-game is about keeping customers loyal well after purchases are made (and during the time purchases are being considered), mobile is emerging as an ideal CRM tool. Little wonder that automotive brands lead the pack in providing their audience information, apps, games and a wide assortment of mobile branded utilities to stay top of mind with their target demographic.

This was no doubt the thinking behind a recent Hyundai campaign. The case study documented in the report recounted a campaign the company ran with Millennial Media to engage with affluent Blackberry users (the audience it identified for its Equus luxury sedan). To enhance brand awareness and provide these discerning consumers a helpful service (not just advertising), Hyundai launched the Hyundai Greetings app, an app that enabled these early adopter, social savvy consumers to create customized greeting cards with a variety of themes to share with friends and family via Facebook, Twitter and email.

What strategies are automotive brands using to reach their audience (and achieve their campaign objectives)? Local marketing targeting was deployed in the majority of campaigns (43 percent), followed by demographics (35 percent) and behavioral (22 percent). Local was particularly (and predictably) popular among major brands and Tier 1 OEMs who leveraged location to drive calls and test drives, location linked calls to action that directly benefitted local dealers and regional automotive associations.

The report also noted an increase in the number of re-marketing efforts, where advertisers run persistent campaigns to engage with users from previous campaigns.

Where is the opportunity for automotive brands? This worthwhile report is chock-full of data to help marketers answer this key question. However, the report also identifies some big question brands need to address ASAP. Take the target demographic. It was quite surprising to learn that 32 percent of mobile auto users are female. That stat should inspire brands to develop campaigns and strategies that specifically address women. In other words, don’t limit yourself. Of course, it wouldn’t be the first time companies passed up a golden opportunity because the were blinded by sexual stereotypes. The early days of the mobile gaming market saw publishers compete to wow male users with fast action games, completely ignoring the casual gaming market in the process. What did it get them? Venturebeat tells us more than half of all mobile and mobile social gamers (53 percent) are women. Will the automotive industry repeat this mistake and focus on the male demographic first and foremost? It’s a tough one to call…

The report also documents a significant increase in the number of automotive brands embracing mobile, but I sense an even bigger opportunity in mobile for companies across the automotive ecosystem (and missing form comScore’s brand list). People generally own their car for 5.5 years. Clearly, mobile auto users are not in the market for a new car every day, but they are open to offers of products and services that keep their car in top shape (oil changes, inspections, brake adjustments), or just make driving fun (tuning kits, in-vehicle multimedia entertainment systems, personal navigation devices).

Clearly, mobile reaches and influences people pre- and post-purchase. But don’t just think mobile. Brands should map out wider strategies to integrate mobile into a cross-media campaigns that draw from a wide arsenal of channels and capabilities (apps, barcodes, outdoor advertising – the works) to engage people — and keep them coming back.