At M-Pulse we continue our month-long look at mobile developer issues and opportunities, and focus on the practical marketing ‘stuff’ developers should master if they are serious about marketing and making money from their apps. We connect with Caroline Lewko, CEO and founder of WIP (Wireless Industry Partnership) and walk through the Mobile Developer’s Guide To The Parallel Universe, a new resource from WIP that lays out the business basics developers need to follow.

I examine a recent report from Ovum that claims social messaging applications cost mobile network operators $13.9 billion in lost SMS revenue last year. The impact of social messaging apps such as Whatsapp was a topic I covered in-depth in Netsize Guide by Gemalto, a comprehensive mobile industry analysis I wrote on behalf of Netsize. I draw from my observations — and those of Pamela Clark-Dickson, Informa Telecoms & Media Senior Analyst, Mobile Content & Applications (@PamelaC­_D) — to provide a more balanced perspective on this report. (See companion sidebar post.)

WIP may be billed as an international company building mobile developer communities, but its role  as ‘the connector’ in the mobile space places WIP at the center of the new App Economy. WIP supports the overall ecosystem by encouraging discussions, co-creation and exchange, and its most recent publication makes good on the WIP promise to make the path easier for mobile developers to reduce cycle times.

App store strategy (multi-store strategy vs. single-store strategy), business development (how to meet the right contacts), revenue models (freemium, subscription and ad-funded), customer engagement (why bother — and how to get it). You name it. This Guide has it covered.

Moving beyond the WIP guide, which is slated to be updated with a 2nd edition this fall, we used our time with Caroline —the supreme Connector of WIP — to talk about what’s really top of mind with developers across the global community.

Where do developers need support? 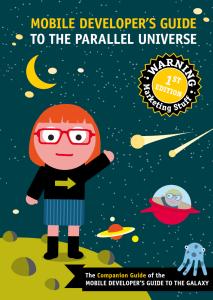 Caroline tells us developers need help getting their head around the need for more versions of their apps. “For a lot of developers, they develop one app, one version, and then they think they are going to be the next Angry Birds.” Not a great mindset if we consider that the winning version of Angry Birds came after 50-some iterations of the app.

To close this knowledge gap the new Guide also dedicates a section to helping developers plan additional versions and the monetization models that match. “Once you add a new feature, then a different revenue may or may not work depending [on the function you introduce in the app].”

As Caroline sees it, the freemium is the “one that’s winning right now.” It all comes down to what people are willing to pay for, which is why mobile advertising is a route to consider (and a big part of the new Guide).

The best rule of thumb: know your customer, and experiment to find what works best. Caroline tells it straight: “Developers need to do trial and error. If it doesn’t work, change it.”

Number one: You can’t own a developer community — and you can’t expect developers to be part of just one community. Caroline notes that many communities expect that, and that is where the problems start.

But you can attract developers by being open and sharing the information you have so that they can benefit and — ultimately — contribute value. “So, you really need to be able to provide information for them to want to use what you’ve got, not to demand that they use it, but for them to get interested about what it is,” Caroline explains. “We actually find the best developer communities are the ones that are actually true advocates for developers within their own company.”

Importantly, developers need to feel they are a key piece of the ecosystem. “I think because a lot of the suits are used to dealing with the t-shirts, they don’t give the t-shirts enough credit for what they actually are bringing to the table.”

These lessons are even more important if we consider that the health of all ecosystems (whether they are managed by operators, platform providers or tools companies is dependent upon the size and support of its developer community (as Andreas Constantinou pointed out in this earlier episode of m-pulse).

Caroline discusses this shift with us, and explores the repercussions of the recent news that sport content giant ESPN had launched a Developer Center, literally opening its doors to third-party developers and providing them access to its stockpile of editorial content, stats, and other data. If you missed it, then check out this detailed post (via TechCrunch) and think of it as ‘just the beginning’ of a wider trend that will surely see more content companies — even brands — open up their APIs to jumpstart innovation around their offer.

As TechCrunch sums it up:

As Y Combinator Founder Paul Graham tweeted recently, APIs are self-serve business development. Many startups are catching on to the business development catalyst that APIs can be, but certainly few would say that ESPN, the self-tagged “world leader in sports,” needs as much help in that department as the many startups out there just trying to get off the ground.

Each episode of our series this month looks at another facet of the fascinating app ecosystem. I raised my Goblet of Rock during the last episode to the Mobile Developer’s Guide To The Parallel Universe. But it’s not just a great new resource from Caroline and her team. The Guide underlines a larger shift underway in the developer community. Yes, developers are becoming serious businessmen (who sorely need the advice and direction the Guide offers). But they are also becoming stakeholders in an extended ecosystem where they alone provide the innovation, ideas and apps that allow keystone companies (the ones that own the tools, data, IP etc…) to survive and thrive. It’s time to take out Henry Chesbrough’s milestone book Open Innovation, and read it with apps in mind. Indeed, opening up APIs can unleash a torrent of business innovation, enabling developers to build value-adding mobile apps. Caroline reminds us that the only way to get there from here is for companies to shift their own internal models from command-and-control to coordinate-and-cultivate. Insisting on strict control over what happens comes at a heavy cost.

Check out Episode #9 of m-pulse here.

Next week we continue our focus on developers with Bango CEO Ray Anderson. Check out untetherTV for the full-length interview – and I’ll provide additional analysis in a companion post here at MobileGroove.

If you have a good company or a great story, then submit it for consideration (peggy@mobilegroove.com or rob@untethertv.com). It may be that we include YOU in an upcoming segment of the show.