Kindle Fire To Heat Up European Tablet Market; What Can Advertisers Expect?

Did Amazon’s Kindle Fire cost Apple some holiday iPad sales? Only Amazon knows. However, reports coming in over the last days indicate that Kindle Fire sales outpaced most analysts’ forecasts. What’s more, the new tablets device is seeing ad impressions grow at an average double-digit daily rate since its launch in the U.S. market in November, a data point that could mean the imminent release of the Kindle Fire in Europe could do more than burn up iPad sales. It may mark a seismic shift in how brands and sellers approach marketing in the mobile channel.

A raft of recent developments supports the observation that this device is indeed a game-changer, starting with buoyant sales numbers that have exceeded everyone’s expectations. Barclays analyst Anthony DiClemente (via All Things Digital) has upped his original estimate of 4.5 million units sold last quarter to 5.5 million. Piper Jaffray is convinced Amazon is on track to sell 10-12 million Kindle devices (Kindle and Kindle Fire), up from the initial estimate of 9 million units. Meanwhile, analyst Tavis McCourt at Morgan Keegan has downgraded his iPad sales forecasts for the quarter from 16 million units to 13 million. (Again, sales lost to Kindle Fire.)

Speculation abounds over precisely how many Kindle Fires have been sold. Amazon, of course, is keeping the real sales figures to itself. (Amazon has only said that it sold more than 1 million Kindles in December, but did not break that figure out by device.) So, we have to connect dots in recent analyst estimates to arrive at a more accurate picture. 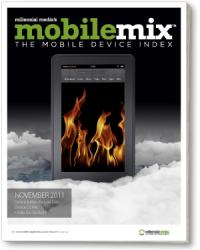 November numbers from independent mobile ad and data platform company Millennial Media show serious momentum is building for the new tablet device, a trend that could spread from the U.S. to Europe when the Kindle Fire sets markets here ablaze.

Specifically, the company’s November Mix (a monthly series of reports revealing key advertising trends with a focus on mobile manufactures, devices, operating systems and connected devices based on actual campaign and platform data) states that “impressions from the Kindle Fire have grown at an average daily rate of 19 percent” since the device was launched in November.  The Millennial Media report stresses it’s not just seeing millions of impressions. “We’re seeing a monthly run rate of hundreds of millions of impressions.”

Smartphones are another story. This category accounted for 70 percent of all impressions (connected devices follow at 16 percent, ahead of feature phones at 14 percent), with Apple’s iPhone leading the pack. It generated 13.54 percent of impressions in November, far ahead of Blackberry, which came in a distant second. 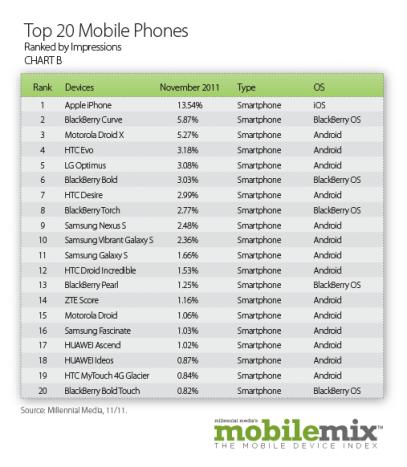 Amazon’s Kindle Fire is exploding in popularity, a development that has serious consequences for developers everywhere (as this guest column from Mubaloo points out). Its affordable price, stockpile of content and tight-knit ecosystem certainly positions this device to move in on the territory so far dominated by Apple.

Aware of this other players are preparing for impact. Just this week mobile operator Orange UK has announced its own branded tablet, the new Orange Tahiti Android tablet (using the Android Honeycomb operating system that also gives users access to Android apps). The device, a re-branded Huawei Mediapad that features a 5-megapixel camera, A-GPS, Wi-Fi, Bluetooth and 3G+ support, is available from GBP 69.99 with a 2-year GBP 25 per month data plan. It is also free to users as part of a Connected 24 month plan with the San Francisco II handset for GBP 41 per month.

With major events such as the Olympics coming to the U.K., players such as Orange no doubt expect the uptake and use of connected devices to skyrocket.

Among the key findings:

Is the tablet our new sit-back device — the one we’ll reach for to research products while relaxing on the couch?

It’s a tough one to call. However, this trend (consumers opting for their tablet over their PC) presents advertisers with unique opportunities to capture attention and engage consumers that encourage purchasing decisions.

As Bruce Hoang, group marketing director, Orange Advertising Network, put it in a press statement: “This is the first time we have included tablet usage in the Orange Exposure report and the findings are quite stark in their description of how people are using devices. Clearly, the one-size-fits-all approach for digital content across TV, PC, smartphone and tablet does not work, and this has significant implications for content producers and advertisers.”

Interestingly, a survey of 2,000 U.K. adults by YouGov found that ordinary Amazon Kindles were a holiday favorite, with one in 40 respondents receiving a e-reader as a gift (92 percent of them Kindles, or 1.22 million units). In comparison, the survey suggests 640.000 tablets were given as gifts, 72 percent or 460,800 of them iPads. Connect the dots, as YouGov has, and the stars are aligned for Kindle Fire to be key to driving tablet ownership in the U.K. in the next 12 months.

Connected isn’t a fad; it’s a hard fact. Tablets are taking off and the Kindle Fire is poised to make its mark on Europe. Are industry observers such as Greg Stuart, global head of the Mobile Marketing Association (MMA), correct when they say tablets will have a huge influence on mobile advertising? Data points and developments certainly support this conclusion. Millennial Media — which research firm IDC says is now the second largest mobile display ad network after Google and ahead of Apple —  draws from a significant number of impressions on its network to conclude impressions from Kindle Fire are on a steady growth curve. This dovetails with user research from Orange indicating tablets (as a category) are for saving time, not killing it, and conducting commerce. As a prime replacement for the PC, where many of us spend hours researching products and digital stuff we want to buy, the rise (and rise) of the tablet forces brands and marketers to expand their ‘mobile’ strategies to include a variety of connected devices if they want to connect with consumers at every stage of the consumer journey (awareness, engagement, consideration, conversion and loyalty).