The Formula For Blockbuster Games Apps — And Why We Are Addicted 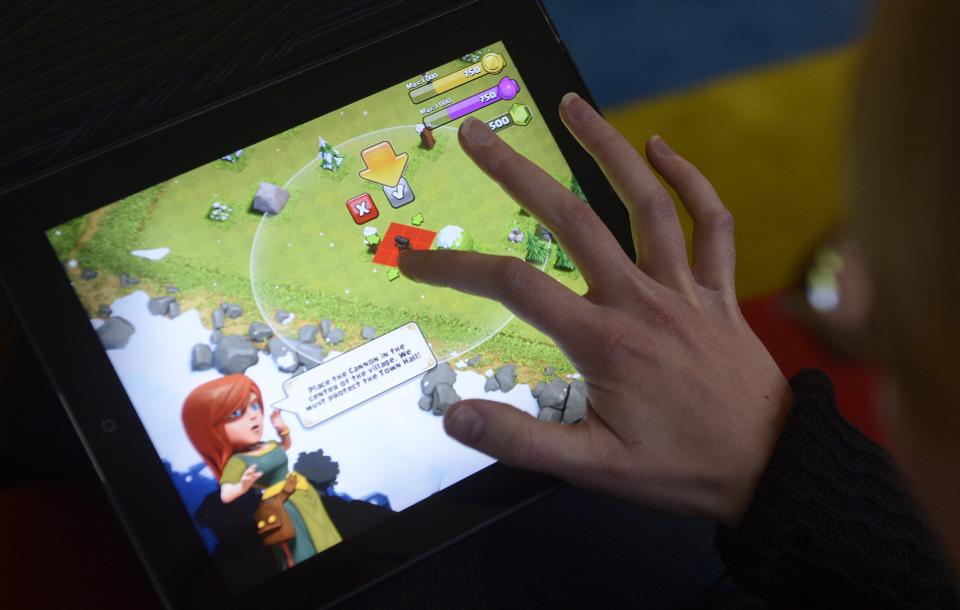 With mobile app user acquisition costs rising through the roof and revenues set to go sideways, major publishers and independent studios are under increasing pressure to find better and smarter ways to boost audience spending in their game apps. While app companies can harness algorithms and analytics to get more bang for their budget, the best way to get to the top of the app store charts—and stay there—may be to crack the code on what market-leading mobile games are getting right, and then improve on that formula to produce an app with massive and lasting appeal.

This is where Player Research, an award-winning user research studio headquartered in the U.K., is breaking new ground with Base Builder Best Practices: A Usability And Player Experience Perspective, the first report to provide a view into what makes genre-leading mobile games addictive and extremely popular. (And base building, an app category that consistently scores high in retention, monetization, and user addiction, is a genre that has valuable lessons for all apps—not just games.)

The result of hundreds of man-hours of analysis examining all aspects of game design and user experience, the 255-page report brings together experts in the fields of Human-Computer Interaction, Computer Science, Psychology and Neuroscience to deconstruct and distill key events in the “first time user experience” into their key component parts. Specifically, the report — which made its official debut last week at the games industry conference Reboot Develop 2016 in Split, Croatia—analyzes four leading mobile games. Of these, three titles (namely, Clash of Clans and Boom Beach from Supercell, and Game of War: Fire Age from Machine Zone) have managed to get the user experience incredibly and consistently right, while the fourth (Disney Interactive’s Star Wars Commander) has stumbled on its way to the top despite strong IP and the power of a globally recognized brand.

From engaging approaches to welcome and onboard new users, to effective ways to time and target push notification messages, to smart ways to trigger and influence in-app purchasing behavior, Player Research identifies the best practices used by best-in-breed mobile games to deliver a great user experience. The games industry is, after all, an industry and has to start acting like one, observes Graham McAllister, Player Research CEO. “In the real-world consumer-facing brands and businesses compete and win by offering an excellent customer experience, and in the digital world mobile games fly or fail based on their ability to deliver an amazing user experience that players enjoy and publishers can monetize.”

Miss a step and app companies risk losing their business. McAllister highlights the example of Punch Quest, the arcade-style fighting game from Rocketcat LLC that was named the “iPhone’s hottest game” but barely generated five-figure revenues.

While Rocketcat managed to “get a lot right,” delivering good gameplay and excellent user experience, McAllister says no one, not even the developers, could put their finger on why the game failed to generate significant revenues. “In the end it’s clear there was no big issue to blame, but rather a series of seemingly very small issues that added up to be the problem.”

Indeed, games can stand or fall based on the user experience they offer. As McAllister puts it: “If an aspect of the game is hindering user enjoyment of the game, or stopping players from making a purchase, then there is a real danger it will chip away at its chances—and its revenues.”

To help app companies avoid the big and small mistakes that may cost them critical and financial success, Player Research has broken down each of the four mobile games in its industry-first report into hundreds of individual components which it evaluates purely from a player perspective.

A deep-dive into Game of War: Fire Age, reveals that one key call-to-action (namely commerce) may be coming up short. In practice, the purchase screen in the game presents players with an itemized list of the nearly 30 items they can buy in the game along with the price. “However, because it is not clear is that this list scrolls, it’s quite likely users are not seeing the entire list and therefore aren’t aware of everything on offer,” McAllister says.

Read between the lines, and it is possible Machine Zone is leaving more than money on the table. The disconnect may also be detracting from the overall enjoyment of the experience. “Making a successful game means removing the many hundreds of apparently small issues and hurdles that can add up to cause the real user uncertainty and—ultimately —dissatisfaction with the game,” McAllister explains.

Significantly, the Player Research report offers more than a SWOT-like analysis of the user experience offered by leading titles. It effectively equips companies and publishers across a broad spectrum— including major studios eager to take their game to the next level and independent developers anxious to close the gap on competitors—with detailed checklists of the key features they need to get right to get players into the game and keep them there. 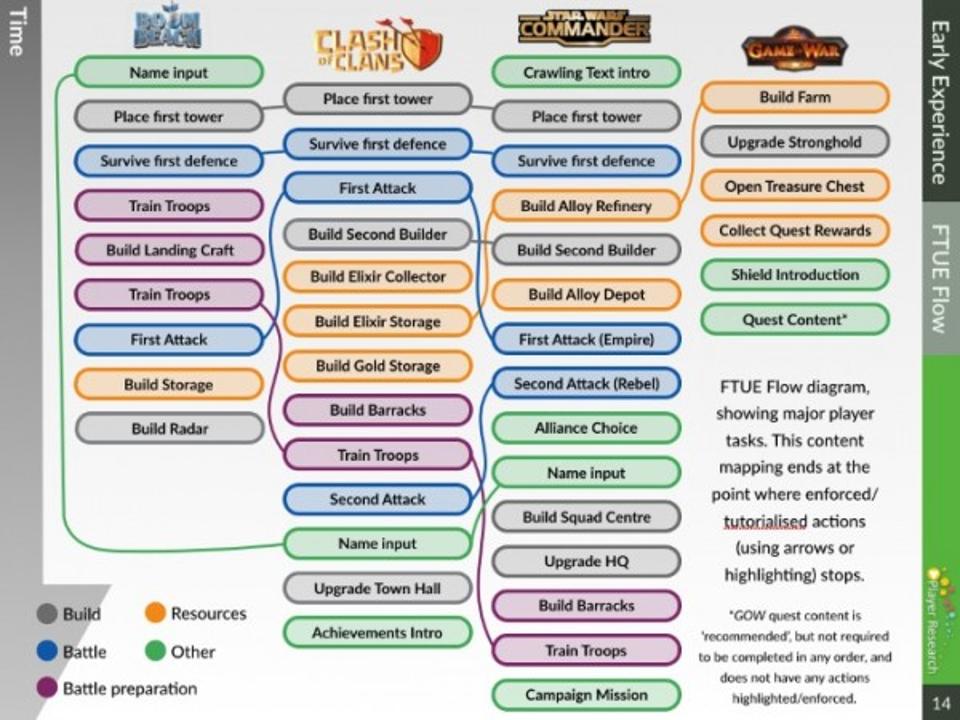 A winning mobile games app has to get key features right to get players into the game and keep them there. (Credit: Player Research)

Onboarding new players can be the biggest hurdle, which is why genre-leading games typically excel at employing fun features and characters to streamline the process. As McAllister puts it: “The efforts to guide players on the tutorial path and throughout the gameplay can pay 10x for studios because they teach users the basics and reinforce critical concepts of the gameplay.” Players who understand the game are likely to play more often, and longer, and this increases the likelihood they will also spend more in the game.

The core importance of getting onboarding right dovetails with one of the more interesting observations to emerge from Soomla—a Tel Aviv-based startup offering a data sharing platform for mobile games. The company’s Mobile Gaming Insights Report – Q1 2016, based on a sample size of 20 million users and 12 million virtual item purchases, points out that “71% of users who convert on the first day, convert within the first hour.” That’s nearly half of all users.

Gur Dotan, Soomla Co-founder and VP Marketing, suggests that better segmentation of users according to their “pay rank” (whether they are light payers or high-rollers otherwise known in the industry as whales) would go a long way toward boosting audience monetization. “But any strategy to extract more value out of your user base presumes you have succeeded in delighting your customer in the first place.” It’s a virtuous cycle, he adds. “Retention mechanics first, revenues follow.”

In a saturated app market where CPIs (cost per install) have skyrocketed, the number one priority, and money-making opportunity, revolves around finding new ways to encourage lasting user engagement. It can also be a balancing act between using tools, tracking, and data to get the most value out of a user audience, and perfecting the user experience to give users more value and a reason to come to the game in the first place.

The first wave of user acquisition may have been data-driven, but the market is shifting and sharpening its focus on the user, observes Saikala Sultanova, Lead User Acquisition Expert at mobile and social games app company Space Ape Games.

“You can’t make a lasting game in a spreadsheet,” she explains. “Game development is a blend of art and science.” Observing user data has allowed many app companies, including hers, to build impressive mobile games. (In fact, the first two games from Space Ape have generated “$50 million revenues from tens of millions of loyal players.”)

It proves companies can build a great game from “being very scientific about their approach,” Sultanova says. But taking a game from good to great will require more. “To create a game that is played for years, demands a high level of innovation, a deep understanding of the user and laser focus on making sure every step, and every detail, elevates the overall experience.”

At one level, the shift means greater demand for analysis and consulting from companies like Player Research. At the other end of the spectrum, it potentially opens up new business opportunities for companies building the tools and automating the processes that will allow app companies to optimize game design.

An early mover is Finland’s GameRefinery, a mobile game analytics company whose patented game design information service allows clients to identify key features that contributed to the success of the top 200 grossing games in the app store and then, importantly, calculate what we call the GAME POWER SCORE because of the revenue potential of these features.” (GameRefinery refers to this as the GAME POWER SCORE, part of the wider mission to “give mobile game developers and publishers new superpowers.”)

Any vendor spin aside, there is no arguing against the requirement for hard numbers and concepts. “It’s a tool to benchmark your features, but it’s also a way to benchmark your game’s commercial potential before in the concept phase, not during the soft launch,” explains GameRefinery CEO Markus Råmark.

As he puts it: “Using tools to make fact-based and better-informed game design decisions gives companies confidence in their choices, and ensures they don’t spend money developing or implementing features based on a hunch.”

Keeping cash, not burning it, is going to be even more critical now that the mobile games market—a market that Silicon Valley-based tech advisor Digi-Capital reckons could see revenues rise from $35 billion in 2016 to $48 billion by 2020—appears to be losing some momentum. Topline figures indicate Q1 2016 saw a huge wave of investment, but in reality everything was small in comparison to the Activision-Blizzard/King deal.

Not all analysts may agree on the on the numbers, but there is a growing consensus that mobile game developers must strike a better balance between passion and pragmatism, observes Julia Palatovska, an investor at London Venture Partners, a seed-stage VC fund focused exclusively on the game sector. Palatovska bases her view on analyzing many of 600+ pitches that London Venture Partners get in a year and her work with developers at Playhubs, a co-working space for games startups headquartered near London. “Most of the game developers who pitch to us are true romantics—they develop a game that they have always dreamt to play. While development of one’s dream game is a great start, we want to see developers who are also thoughtful about monetization, marketing and user acquisition strategy from day one,” she explains.

As she puts it, the most successful game companies “combine world-class creativity in art and gameplay with innovative strategies to engage players, and a deep understanding of the performance metrics for their genre. As investors we want to hear from game developers about how they make tough decisions, such as whether to release, iterate or kill their game based on hard numbers and KPIs, to focus time and resources on a project that shows real potential, and not just an app they feel passionate about.”

Clearly, the market wants mobile game companies that cultivate the talent and teamwork to design and deliver an app with emotional appeal and commercial potential. But, more importantly, the market needs companies that can equip developers with the business intelligence it takes to produce a games app sure to achieve lasting impact — and success.