Who are the big-spenders in mobile advertising? In Q3 2011 the financial services sector jumped from third place in Q2 2011 to become the leading vertical in the U.S., ranked by mobile ad spend, followed by Entertainment, Retail & Restaurants, Telecoms and CPG (consumer packaged goods). Globally, finance placed number four.

This massive growth, with ad spend increasing over 356 percent year-over-year, confirms banks, insurance companies and credit card companies are aggressively using mobile to raise awareness of their products and services, generate leads, encourage app downloads and —significantly—engage more with people on their device(s) of choice. The vast majority (80 percent) of people accessing financial information or apps are smartphone owners, (more than double the general mobile population). Moreover, the mobile finance user is also 76 percent more likely than the general mobile user to own a tablet or e-reader device.

Watch for more stats and insights in Mobile Intel: Finance, the third in a new series of reports slated for release in the next weeks. Mobile Intel draws from  consumer research from comScore and platform data from Millennial Media to help brands understand the mobile finance users and the opportunities to engage with them on mobile. 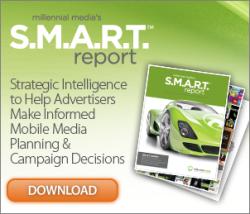 These are some of the key findings covered in the Q3 S.M.A.R.T. report (Scorecard for Mobile Advertising Reach and Targeting), strategic intelligence aimed at helping advertisers make informed mobile media planning and campaign decisions based on network data provided by independent mobile ad and data platform company Millennial Media.

Per the S.M.A.R.T. report a total of six verticals experienced triple-digit growth or greater year-over-year, with Technology leading the pack. The tech sector, where campaigns are focused on B2B offers such as cloud storage and consulting,  saw explosive growth of 687 percent, followed by CPG (up 378 percent).

Significantly,  Entertainment, which ranked number two in the U.S. and number one globally,  increased ad spend 145 percent year-over-year (Q32011 vs. Q3 2010). The jump confirms advertisers are leveraging mobile to drive awareness of blockbuster movies (and visits to theaters showing them), as well as create buzz around DVD releases, TV series and social media strategies.

Meantime, brands across all sectors are ramping up their use of video in mobile advertising campaigns. The report shows that the number of campaigns on the ad platform providing people the option to view a video (post-click campaign objective: watch video)  increased 78 percent in Q3 (compared with Q2) an accounted for 32 percent of all campaigns in Q3. 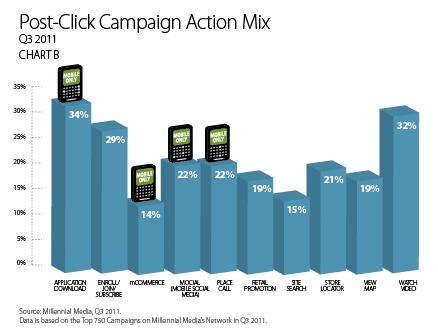 According to Millennial Media, a key driver is the use of video by entertainment brands to drive people to movie trailers.

Indeed, our growing enthusiasm for mobile video —content that shines on smartphones and pushes the envelope on tablet devices— is further confirmed by report findings that shed light on current developer and publisher trends.

Significantly, the iPad, Samsung Galaxy Tab and Motorola Xoom were the top three tablets on the ad network in Q2. Impressions on the iPad alone were up more than 450 percent for the whole of 2011.

Overall, smartphones grew 7 percent quarter-over-quarter and continued to dominate the category Smartphone, Feature Phone & Connected Devices with 72 percent of impressions. Android led the connected device and smartphone mix with 56 percent of the impressions, compared to 28 percent for Apple iOS and 13 percent for RIM BlackBerry.

Smartphone penetration continues to climb, and so does our interest (and  activity) around gaming apps. In fact, Games, which have been the number one  application category on the Millennial platform for over a year, continue to grow.

Local gets a boost

Another highlight of the new Q3 S.M.A.R.T. is the focus on targeting methods and new results that show the use of local market targeting is on the rise.

Specifically, nearly half (45 percent) of advertisers used targeting to reach their audience. Of those 66 percent made use of location to connect with people in the correct context, representing a 50 percent quarter-over-quarter increase. The balance of targeted campaigns relied on behavioral and demographic factors.

Connect the dots, and brands are buying on a national scale but tailoring their ad campaigns to drive people to local bricks-and-mortar destinations (retail outlets, businesses, branch offices). This jives with the report finding that a significant number of post-click actions centered on encouraging people to complete purchases using their mobile devices.

Get ready for holiday shopping

Finally, the new report draws from consumer research conducted by InsightExpress to help brands map out where (and how) they can use mobile in the marketing mix. Specifically, InsightExpress’ Q3 2011 Digital Consumer Portrait found that 32 percent of consumers plan to use their mobile devices to help research products by comparison shopping, while 27 percent will use them to read reviews while in the store.

InsightExpress provides us yet another data point confirming that mobile shopping (and all the interactions leading up to the purchase) is bigger and poised to be ever bigger as we enter the first full week holiday shopping season today.

But that’s just one notable trend documented in this new S.M.A.R.T. We also learn that mobile represents a mega-opportunity for brands across all verticals. Technology, for example, grew a whopping 687 percent. Meantime, financial services sector moves up the list of Top 10 Advertising Verticals to place #1 in the U.S. and #4 internationally. This is significant and underlines the perfect fit between personal finance offers and advertising delivered to our fiercely personal mobile devices. Banks, insurance companies and credit card companies see a connection, which is why they are spending 356 percent more (for the period Q2 2010 to Q3 2011) to connect with us on out mobile phones. But the real news is what we can likely expect from this vertical moving forward. Clearly, mobile is emerging an ideal vehicle to do much more than raise awareness of products and generate leads. Therefore, expect companies across the Finance vertical to become progressively more creative in their use of the mobile channel to achieve their wider business objectives: drive customer retention, encourage cross-sell/up-sell and keep customers loyal.