The new Apple iPhone dominates the news today, but will the new model allow Apple to grow its share of ad impressions and remain ‘the’ device developers and brands need to factor into their mobile strategies?

It’s a tough one to call. New data from independent mobile ad and data platform company Millennial Media shows that Apple mobile devices certainly led the pack in Q2 2012, accounting for 31.4 percent of all impressions. The Apple iPhone was also the number one device on the Millennial Media platform, accounting for nearly 16 percent of total impressions (up from 15 percent in Q1).

It will be interesting to see if the new iPhone 5 will generate a spike in impressions, and follow in the footsteps of the iPhone 4S. When the device was released in mid-October 2011, ad impressions on the platform for that device alone increased 200 percent after one week, and grew over 1800 percent after being marketed for just one month.

Meantime, an online survey of 1,000 adults in the U.K. — conducted by Usurv immediately after the iPhone 5 news yesterday — indicates the new device might not be a crowd-pleaser. While 44 percent of existing iPhone users already want to buy it, only 20 percent of all smartphone users in the sample said they would to upgrade to the new iPhone without needing any further information about the product. 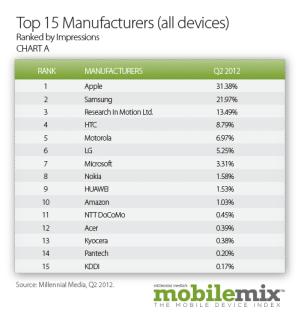 Samsung, the number two device manufacturer, showed significant growth over Q1 2012 (almost double actually), accounting for 22 percent of impressions. In fact, Samsung — with eight phones in the top 20 devices — did surprisingly well on the platform, accounting for 13 percent of handset impressions, nearly double the impressions it chalked up in Q1. RIM was the third device manufacturer on the platform, followed by HTC and Motorola.

Apple may have the lead in devices, but iOS remained relatively flat and represented 34 percent of impressions on the platform in Q2. Android held on to its number one position, accounting for 46 percent of impressions on the platform. It’s likely that the advance of Android devices by several manufacturers available to consumers at more reasonable range of price points will widen the gap between the operating systems measured by impression share.

But the real news is the rise of smartphones as a device category.

Overall, smartphones accounted for 74 percent of impressions, up from 66 percent in Q2 2011.

Since roughly 20% of the 6 billion mobile handsets in the world are smartphones, the opportunity for growth is in Europe (Spain, Italy, and France come in below 40 percent penetration) and in developing markets including Brazil and China.

Tablets: the one to watch

However, several factors — including the rise of multiscreen/multitasking — are coming together to drive massive growth in tablet penetration and usage. Our media time is spent in front of multiple screens (PC, TV, smartphone and tablet). Recent research indicates that tablets are used for entertainment and as a starting point for activities such as shopping where the bigger screen and the context (use at home) encourage relaxed and leisurely interaction with content and advertising.

Data from Millennial Media and consumer research firm comScore also confirm a shift as we migrate our viewing habits from online to mobile devices. The vast majority (95 percent) of total tablet impressions on the Millennial Media platform were from Wi-Fi networks, “supporting the idea that most tablet owners use their device at home or work where they have reliable connections.” 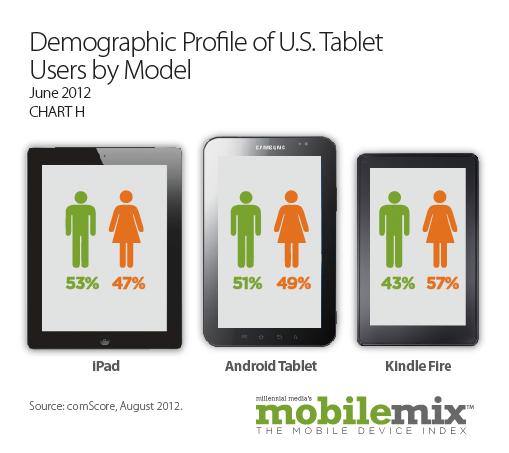 Who are the tablet users? According to comScore data, the U.S. tablet user profile (by tablet model) is similar and equally split between gender, age and household income. Interestingly, Kindle Fire counts more female users.

Finally, the report provides the inside track on developer trends, including the Top 10 Mobile Application categories. Games and Entertainment continue to hold the number one and two positions.

Interestingly, impressions from Science and Technology books and reference apps came out of nowhere to take the number three spot. The report attributes this to year-end school exams and students interacting with educational apps to prep for lessons and tests.

Once again developers and advertisers have a report that helps them identify and monitor the trends they need to factor into their strategies and planning. In addition to key data points about the Top 20 Mobile Phones, Top 10 Mobile Application categories and the Top 5 Tablets on the platform, we have confirmation that Smartphones and non-smartphone devices are the ones to watch. I mean that literally, since this report ­— and a raft of industry research ­— underlines the huge opportunity in mobile video driven by how we use our devices (often simultaneously) to consume digital media. As I have written before, we are becoming cross-platform consumers, and this will have a profound impact on mobile marketing and advertising.