Mobile has become our constant companion in what is fast-becoming a multi-screen world, where we choose our screen (mobile, tablet, PC or TV) depending on our context and what we want to accomplish. This shift from consumption to participation turns up the pressure on marketers to do more than shift spend into mobile to get our attention.  They have to architect comprehensive strategies ­— with mobile at the center — to accompany our daily activities and close the loop.

Research from independent mobile ad and data platform company Millennial Media and mobile measurement firm comScore shows that entertainment brands are stepping up efforts to engage people every step of the consumer journey and drive objectives further down in the purchase funnel. Granted it’s critical to encourage people to click on entertainment ads on their mobile devices. But now brands have to get creative about the call-to-action and enable people to do much more: access movie information, check TV show times, view mobile video trailers, buy tickets, pre-order and buy DVDs, and connect with social media sites to spread the word to friends and communities. 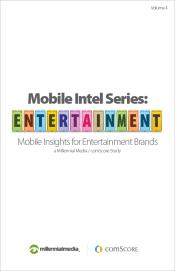 Mobile Intel: Entertainment, the latest in a series of Mobile Intel reports, shows how entertainment brands are using mobile to run campaigns throughout the entire product lifecycle, from promoting releases to driving sales of associated merchandise. In many cases, entertainment brands use retargeting techniques to reach consumers who have previously interacted with their earlier ad campaigns.

The report is geared towards brands, providing them insights to help identify key mobile entertainment opportunities and engage with the growing audience of mobile entertainment users— the segment of consumers using their mobile devices to access information, download content and apps and make purchases.

In fact, the report tells us a significant percentage of mobile entertainment users are already reaching to their mobile phones to research and buy entertainment content. Specifically, digital purchases — movies and TV shows — are the top-ranked purchase made on a smartphone. Nearly half (47 percent) of all consumers bought content or music, followed by clothing/accessories (37 percent) and tickets (35 percent).

Why does this demographic buy entertainment content and merchandise using their mobile phones? comScore connects the dots in recent consumer research to tell us it’s all about ease of use. Nearly two-thirds (63 percent) of those who made a purchase listed on-the-go convenience as their chief motivation. Read between the lines here, and this all ties back to the shift in our behavior. We can do more with our phones — and we do (!) provided there is no friction and lots of value. Being able to buy tickets before a sell-out perfectly captures the impact mobile has on our lives, and underlines the importance of mobile in the consumer journey.

Who are mobile entertainment users and what are the key characteristics that marketers in TV, films, and home entertainment, need to note?

Unsurprisingly, the mobile entertainment audience is already huge. But expect growth to continue thanks to the advance of the tablet and our new appetite for multi-screen entertainment experiences that demand the smart hand-off of entertainment content, engaging activities (like social media) and commerce across smartphone, tablet and TV.

According to comScore, smartphone ownership was up 55 percent year-over-year, representing 42 percent of the total mobile audience in December 2011. In particular, 80 percent of the mobile entertainment audience owns a smartphone.

One example that stands out is how TV networks are achieving their objectives by running campaigns that use day-parted Wi-Fi targeting. In other words, they target specific demographics (such as women ages 18-34), who are using a home Wi-Fi connection, during a specific time of the day. The approach also reaches consumers who are watching TV and using their tablets or smartphones at the same time.

From 2010 to 2011, mobile ad spending by companies in Entertainment vertical grew 133 percent. However, this was eclipsed by spending by other verticals, such as Finance and retail, where brands are already sharply focused on reaching consumers deeper down in the purchase funnel. Nonetheless, Entertainment never dropped out of the top 10 verticals, demonstrating that the growth came from an already established base level of spending.

When compared with the goals of  all the advertisers on the Millennial Media platform, Entertainment advertisers focused much more heavily on Product Launch / Release campaigns, which are a perfect fit to promote the vast number of new releases in the industry.

But Entertainment brands are also leveraging mobile (and increasingly tablets) to drive a wider variety of campaign objectives that match how we want to engage. One-third (33 percent) of entertainment campaigns included a mobile social media call to action, making it easy for fans to discuss and share content. 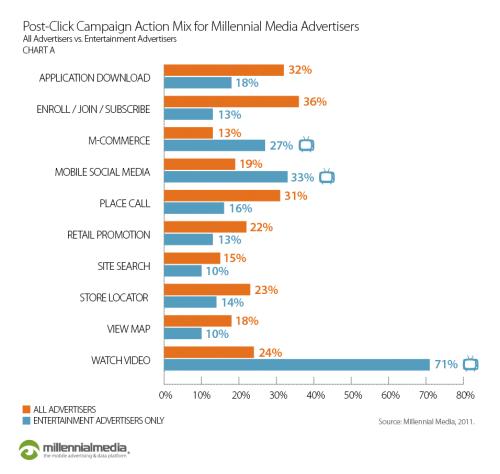 The report also provides key proof points about the attractiveness — and effectiveness — of video. Nearly three-quarters (71 percent) of entertainment campaigns incorporated video in their campaigns. Specifically, studios drove awareness (and engagement) by showing trailers leading up to new releases. At the other end of the spectrum, TV networks featured previews for upcoming episodes, and developers gave fans a chance to view new games around popular films and shows.

Entertainment advertisers also leveraged innovative types of video ads, such as interactive video and click-to-video ads. Expect more marketers to use video now that consumers are increasingly using smartphones and tablets, and connection speeds have increased to make it easier to deliver video content at scale.

The key messages of this new report dovetail with the trend Liz Jones, Senior Vice President, Digital Marketing at Relativity Media — an independent film studio that acquires, develops, produces, and distributes films and produces television programming — is experiencing first-hand.  As she put it in a recent interview: “The biggest shift for us in mobile is the rise in people watching video with their mobile phones.”

Another “game-changer” is the way people use mobile to get things done, a new characteristic of mobile that allows Relativity Media to achieve objectives deeper in the purchase funnel. Chief among these is ticket purchases.

But recent mobile ad campaigns are not just driving ticket sales for the movie entertainment Relativity Media creates. Because people are also using their devices to do show time lookups and see what is playing in a movie theater near them, “mobile is a place where people make their decisions,” Liz observes. “They are deciding where to go to this weekend, and we are on mobile because we want to make sure they are aware our movie is playing, and that they choose our movie to go to.”

This approach is doubly important when it comes to connecting with a younger demographic, Liz says. “They are just spending more time on mobile and it’s the only place we can reach them.  So we have to be in front of them with our marketing message.” Interestingly, Liz is excited about the power of mobile — thanks to geo-fencing — to make sure that her brand can continue the interaction long after the person has watched a video, clicked a banner or bought a ticket. “It’s about being near the theater where our movie is playing and the movie-goer getting a reminder about the show time or an offer for free popcorn if they do a certain action right at that moment.” It’s also where Relativity Media will be focusing some mobile ad campaigns over the next six months.

The above interview except speaks volumes about where Entertainment brands must focus their strategies to sync up with the shift in our behavior. Whether it’s buying tickets, setting up reminders so we don’t miss a show or just immersing in a video trailer on our smartphone, mobile is where we make decisions, take actions and amplify our choices. The effective strategies are the one that harness mobile (as part of a multi-screen approach) and apply targeting techniques to take advantage of location, interest and intent to deliver entertainment content and advertising. Success is about driving results deeper in the funnel and delivering advertising and content that serve as a stepping off point to for us to get things done.

Editor’s note: Look for more mobile insights and examples from Relativity Media and others in a project that brings together the Mobile Marketing Association and Millennial Media.